The assertion that the universal European culture rests on the fundaments of the Roman culture can be considered already a cliché. However, the Middle Ages, the Humanism, the Baroque or the Enlightenment from the 19th century would have never been born without the cultural and spiritual heritage of the classical antiquity.

The event entitled „Roman Delights” organised by the Roman Limes Research Centre affiliated to the Mureș County Museum would like to evoke this connections, through the means of the culinary art.  Our event tries to recall the Roman dining habits and recepies as well as the atmosphere of the banquets by delicious food and wine tasting made after authentic Roman recipes. In order to spice up even more the atmosphere, the visitors will be able to read Roman literary extracts related to meals and banquets, and also to watch small films about the reconstructed places used for dining in the Roman times. 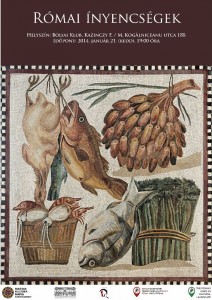