Promoting the Roman heritage from Călugăreni

An international archaeological conference, “XI. Erdélyi Magyar Régészeti Konferencia” (11th Conference of the Hungarian Archaeologists from Transylvania),  was held in Miercurea-Ciuc on the 8th – 10th of November 2013, with the participation of archaeologists from Hungary, Slovakia and Romania. This conference has a special importance in the dissemination of our results concerning the Eastern limes of Dacia on an academic level. Two members of our team held two presentations on the researched issues.  In one   the main results of the research history of the Roman site of Călugăreni has been presented. The other was focusing on the analysis of a particular type of Roman lamp, an iron hanging lamp that was recovered from the same fort during the archaeological campaign from 2013. 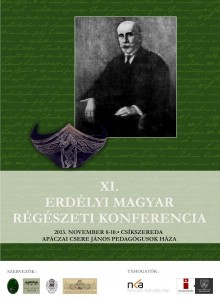