The Gurghiu Department and the Roman Limes Research Centre of the Mureş County Museum is kindly inviting you to the Ars unguentaria workshop on the 17th of May 2014. 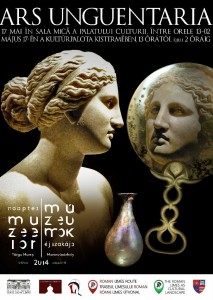 Ars unguentaria is an event organized by Mureș County Museum with the occasion of the Night of the Museums. The visitors will have the possibility of experiencing the atmosphere of Via Piperatica, the greatest spice market of ancient Rome, in an ambient recreated with this occasion in the Small Hall of the Palace of Culture from Târgu Mureș. The activities will focus on three main aspects: an exhibition area dedicated to body care during Roman times, which will present the main categories of artefacts used for cleaning the body, and two interactive workshops dedicated to the production on the spot of different creams and perfumes popular during the period, based on original recipes. During the process, replicas of original ceramic, glass and bone utensils will be used and the visitors will be able to test the different flavours and perfumes. The interactive workshops will be accompanied by information regarding the popular spices of the time, the Roman spice trade with the Orient, as well as the perception of luxury in the Roman society.